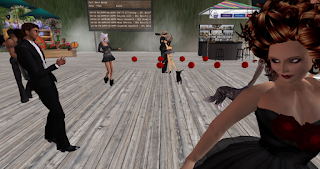 While working on a story, I’d been introduced to Renfew Sperber who along with her brother msw Tomorrow own the Callidora SIM in Second Life. As we chatted about the upcoming event, she told me of her brother’s struggle with cancer and of their efforts on behalf of the “Relay for Life” activities in Second Life and of their ongoing fundraising activities for the American Cancer Society. I found their story compelling and had hoped to meet with both for a conversation. We exchanged e-mails and in-world IM’s to set up a date and time for the three of us to meet. It was unfortunate that msw was unable to join us as his real life job interceded, but he agreed that Ren could speak for him since she was integral to the efforts at Callidora.

Nazz: What was it that brought you into Second Life?

Renfew: Initially I came in to research the viability of the second life platform for my real life work. I was challenged by our engineers to come up with a way to provide more worldwide communication and peer-to-peer collaboration opportunities to them. We are dispersed ... seven countries. So this was a big challenge. I bought a copy of Wired to read on the plane trip back from France and stumbled on an article about IBM and what they were doing in second life at that time (2007). Light bulbs started going off in my head and after a couple of months I built up the courage to come in to research a bit more.

Nazz: Does your company still use second life?

Renfew: My company never bought into the idea … a little too new and untested, although they did seriously consider my proposal. It is really following this initial testing of the waters that the story of our lives, mine and my brother’s … and our evolution in second life begins.

Nazz: When you started, had msw already been diagnosed with cancer?

Renfew: Yes, he had been diagnosed with colon cancer in January 2007. In fact, he spent his birthday that year in the hospital room after having had this diagnosis and three feet of his colon removed. He was in chemo at the time that I found out about second life and came in. I needed a partner in crime, and could not think of a person more likely to support this and see the potential of the technology and least likely to laugh me out of the room. I told him about it and the next day he had an avatar and was here. He has been amazing and inspiring.

Nazz: Is that when you both became involved with Relay for Life?

Renfew: Yes, we had purchased the islands and developed them to create a test site for the work project. During that same time msw joined the survivors group in second life. It was amazing for him. He had not responded well to his chemo and was very sick. In real life there was not a local survivors group within easy commute distance, so the second life survivors group became a lifeline for him. In the group he met many people and through them he became involved in Relay for Life. Also I need to mention Dolcebella Zabaleta. Dolce is msw's real life wife. She also came in and comes to most of the concerts. So this is real family thing. She has been incredibly supportive of him, me, and this entire journey. Ishtar Roux has been our team captain for the past two relays. After the work project fell through we seriously had to reconsider what we wanted to do with the island(s) and our second life journey. We decided to use the islands for hosting benefit concerts to raise money for RFL. This started in early 2008. After the relay ended, we decided that we wanted to continue to raise money year-round for the American Cancer Society. msw contacted them and made arrangements for special kiosks to be made to allow us to make direct donations year-round. We launched these benefits October 2008 to supplement the RFL season.

Nazz: How many islands do you own?

Nazz: Callidora is for events?

Renfew: Callidora Beach is the home to our benefit concerts. We have had the great gift to be able to work with some amazing talent and this just would not have happened without them. From October 2008 to July 2009 we raised just a little under $6,200 USD for the ACS.

Nazz: With the end of RLF, will you be doing same this year?

Renfew: We plan to kick off in October again. Finalizing the schedule now, but typically we've run the events the third Saturday of every month. We will continue through July 2010 and the take August and September off as we did this year. Our goal is to break $8,000 USD this year.

Nazz: How is msw doing, he’s still in remission I hope?

Renfew: msw is doing great. He is still in remission and we are incredibly thankful and humbled by this. I wish he was here to tell you about his experiences as a survivor in second life. A number of months ago the survivor group pulled together a number of survivors and had them share their stories with the rest of the survivor groups. msw participated and told his story, along with a number of others. I was totally blown away … sitting on this side of the screen, just listening and watching the chat, truly left me without breath. The power of the ways that second life can provide community and support to individuals that are in such situations was very clear and incredibly moving.

Nazz: It sounds like an incredible journey for you both.

Renfew: He is my only brother and we are very close. I was there with him and his family after the surgery ... to be able to have him here is an amazing gift. We live in different parts of the US and second life was a way to keep very close during this time in his life. We joked that we talked more in a single week after second life than we had in a month before that. Put on the headsets and there you go! It has been so very wonderful, being able to share all of this with him. And look at what he created … this beautiful … beautiful place. An architect in real life, this was a way for him to really exercise his imagination and became a healing place for him. I wish I could find the words, you know, to really articulate all of this … there is a great deal of emotion involved.

Renfew: I think that the one thing that comes to mind is that the journey in second life is not always the one you think it will be. Serendipity steps in and the process you, the vision you have, the work you do evolves. msw and I talk about this a great deal. We found things here, and in ourselves through being here, that we could not have possibility imagined. Being open to possibility and embracing it is a big part of the second life experience.

Dana Vanmoer mentioned this article to me in a conversation online yesterday, from when this article was reprinted on Friday September 7 2017. The Second Life Newspaper would fold less than a year later, and Nazz Lane would leave virtual journalism to concentrate on writing fiction. But the Relay for Life in Second Life would go on, to continue to strive for the day a cure is found for all cancers. - Bixyl Shuftan
Posted by Bixyl Shuftan at 4:01 AM No comments: