Second Life has been full of funny moments. Here's a couple that stick out. 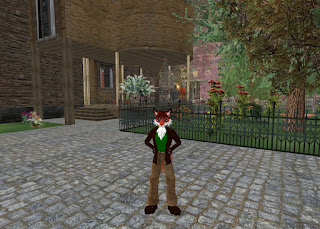 The first relates to my avie. I had started out with the ringtail foxfolk, partly to stand out, and partly as a reflection of my love of science-fiction. A friend gave me some cash to upgrade, but I postponed it for a while, giving some thought on what to upgrade to.

While in a store looking over options, I got the attention of a couple others, "I don't see too many still in their original skin," spoke one. I explained I was thinking over my options. "Well, I'd make a decision soon. The way you are now, people are going to think you're new. With a new avatar, it's going to change how people look at you."

A friend of mine had recently joined Second Life, so the next day I made my decision. I decided to stay a foxfolk, but with my family part redneck, and one of the online sci-fi comics I read it's red foxfolk were traditionally laborers, I got a Luskwood Red Fox avatar.

So did the way people saw me change? Well, the next day while exploring around, a woman walked up to me, and propositioned me! She was a cyberhooker looking for a few bucks.

I've never "paid for it" in real life, sour love life or no, so I politely declined. I guess since I was out of my "baby coat," she assumed I had cash.

A couple coworkers of mine had plenty of tattoos, piercings, odd hair, filed teeth, etc., and managed to find women to marry them. So perhaps it's not hard to imagine that some girls would go for a "foxy guy." ;-) 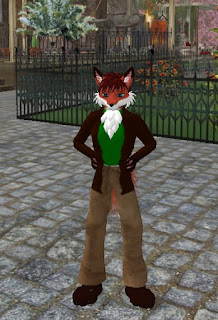 My second story had something of a somber beginning. It was Tuesday, September 11, the sixth year anniversary of that dreadful day. In SL, I stopped by a memorial to pay my respects. I was going to teleport out for the evening, but recalled a recreation of the Twin Towers next to the "New York City Block" area. So I teleported there to see if there was any memorial there, and landed in the middle of a conversation between two ladies, "Hey, there's a fox on your head." ;-)

I greeted them, and they welcomed me into the conversation. It turned out they were both New Yorkers, from Brooklin, and they were in on the design of the place, basing it on their home turf. We discussed 9-11, the ceremonies that day, and a third lady soon joined in.

In the middle of the talk, a guy ported in, and walked up to a couple of the girls. It took a few moments for him to rez, so we thought nothing of it at first. Then below his belt, a certain obviously male extremity appeared.

I wasn't sure what was going on. Was this guy last at a nude beach or somewhere and he forgot? So I typed the first think that came to mind:

"Excuse me, your fly is down."

And the girls burst out laughing. I wasn't sure how the guy would react. He reacted by porting away almost immediately. One girl spoke, "What happened? I didn't see (him fully rez)." We explained to her, and concluded it was some creep who was trying to get his jollies by shocking the girls. But instead got humiliated by my one-liner.

One of the girls and I exchanged friendships, and we've continued to keep in touch.

Guess my cheesy puns are good for something after all.

Addition: This was my very first article about Second Life, sent as a Reader Submission to Second Life Newspaper in October 2007. The picture is from September 17, 2007, possibly from New York City Block. The stories are a rather amusing incident just after I got my red Luskwood Fox avatar, and another when I dropped in on the New York area.

The first story I continued to look back with chuckles. As it turns out, lots of girls in human avs don't mind a little hair on the chest when it comes to dating. Of the second, It was the owner of New York City Block Cheri Bing I became friends with. And we kept in touch for years until real life would force her off Second Life. As for me, this would be the first of many, many articles I would be writing about Second Life.

Posted by Bixyl Shuftan at 6:04 AM No comments: