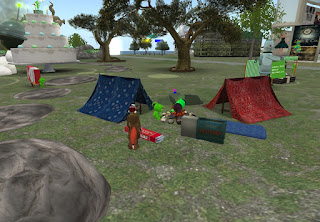 Going back onto the Second Life Fifth Birthday exhibits, I had heard about the Rezzable Greenies exhibit, so I went over to check it out. Teleporting over, I found myself next to a barbecue area of one of the little green men roasting something over a fire. Nearby is a stand with a robot next to it, where one can pick up a free robot of his or her own. From the campfire some stones lead to a huge birthday cake, which a Greenie UFO crashed it, the same cake featured on the “We’re Turning Five” celebration picture on their website. Not far from that is a large Greenies statue in front of a small public gathering area. According to the rezzable.com website, it’s a “Church of Greenies,” the site of some celebrations during the first week of the two week event.

Just across the road was a Tiny exhibit by Raglan Shire. Inviting visitors to “take a walk on the tiny side,” a few free tiny avatars and items for them were available. Further exhibits showed scenes of Winterfest, the “Tiny Olympics” (July 12 2008), a Tiny Science-Fiction area, and other places. Nearby was also a Tiny airport with free airplanes. The Japanese tinies had their own exhibit next door with some free items. 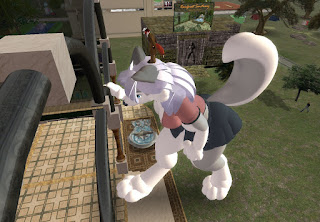 Not far away to the west was the “Furry Pride” exhibit, presumably from Northstar as when I clicked on a replica of the 50 foot huskygirl macro avie, which sported a short-skirted schoolgirl dress, I got a notecard with some information about them and a landmark to Northstar Islands. Behind the macro is a “Megastompolis City” game in which two players act like movie monsters on a city block, seeing who can smash the most buildings. In front of the macro is a building with a bulletin board one can post pictures on. 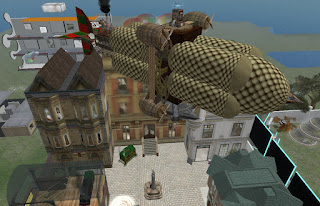 I heard about a place called “Down the Rabbit Hole,” so I went over there. It was little more than a hole and a sign. Going down, I was confronted with scenes from out of “Alice in Wonderland.” Clicking on “Drink Me” teleported me to one room, and in there “Eat Me” sent me into a normal looking bar, of which the door led back outside.

I also checked out the Caledon exhibit. The place featured a town in Victorian style architecture, next to a small woodland. Flying overhead was a steampunk zeppelin, pouring out smoke. Going inside the buildings, there were a few humorous pictures, and a free cottage.

These are just a few of the exhibits in SL5B, so go over and see them for yourself.