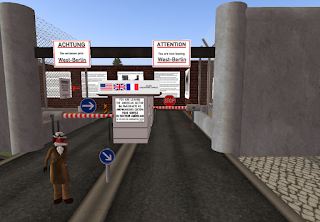 On Veterans Day/Rememberance Day, I heard about a replica of part of the Berlin Wall set up here in Second Life. IMing the man I heard built it, Christo Larsen, we chatted for a couple minutes, then he invited me to his sim Ciel. So I went over.

“A lot of foreign people don’t know much about about the Berlin Wall,” Christo, whom is German, told me, “even th e younger ones. He explained that the New Berlin area also had a replica of the Wall, “It’s very good, sophisticated, but they don’t have any information, ... no displays.”

Christo explained he was aware of the Berlin Wall as a kid, but he lived far away from it, “This whole business didn’t touch me, no connection. I never went to it while it was up. ... But still, I remember the day (when it came down). ... friends and family who couldn’t see each other ... “ His thoughts turned again to how people forgot, “You know how people ... all the things have been better, they don’t understand. ... inside, they didn’t let yo u meet them ... they arrested, they even shot. ... It’s been nineteen years now. Of course people born under a united Germany they don’t know what it was like.” 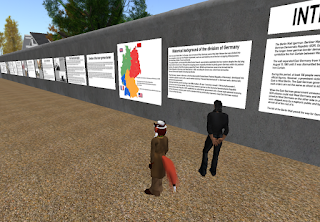 “I’ve even have someone ask when Hitler built it,” Christo remarked of how little some people knew about it, “I don’t see them as stupid. For instance, North American History, the Civil War, I don’t know what it was about. ... Second Life ... we have plenty of malls and clubs ... we need more educational areas ... debates ... it’s one thing to read a %bout it, but if you see a movie or docudrama ... “ Second Life was in turn a better media, he told, “gives you a chance to walk along it.”

The exhibit itself consisted of the Wall with bare dirt, wire fence, sections of old brick wall (presumably buildings caught in the path of the Wall) and tank barriers on the eastern side. With the western side marked by graffiti, the eastern has information signs and pictures for visitors. In the middle of the Wall Section was a replica of the American Checkpoint - Checkpoint Charlie, “The most famous one, being in the movies.” He mentioned as the entire Berlin Wall was constructed on East German territory, the American soldiers at the checkpoint were technically on the other side of the border, “but no one shot for that.” 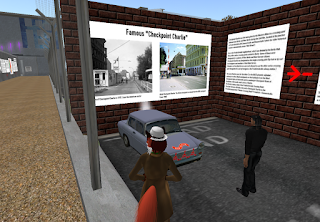 On the East German side were & a couple cars, East German Trabbi, “symbol of the inferiority of the East German economy. ... plastic, not steel, body was a hard plastic shell.” An East German worker often had to wait ten to fifteen years to get one of the “stinky and noisy” vehicles, “But people still love them,” Christo saying they were now a rare collectors item.

We walked along the displays to those of escape attempts across the Wall. One was a picture of the East German soldier who made a break for it, and safely made it without being fired at from either side. Another picture was of a woman who dropped from a high window in a building straddling the Wall zone to reach freedom, later dying from her injuries. Christo talked about what he felt was the most famous death at the Wall, a teenager trying to make a break for it , getting through no-mans-land, and getting shot just before he could get up the West side of the Wall. He bled to death in front of everyone, Christo saying the soldiers on both sides were afraid of starting a fight. 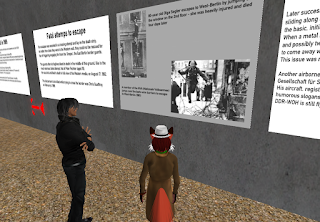 Then there was the fall of the Berlin Wall, “The border all around was armed, but Berlin was the symbol ... divided streets ... finally people were able to sit on the Wall. No one knew about the soldiers, who still were under orders to secure the border. But none of them fired ... we were very lucky. In 1953, East Germans protested ... Soviets sent troops in, smashed the uprising down violently.” Christo felt the Perestroika movement under Soviet leader Gorbachev helped pave the way for the fall of the Wall, but that it would not have been possible without the lessening tensions between Russia and the West.

Pictures showed the wall coming down, Christo giving Dec 22 as the date. He also put up comparison pictures of how bare places looked just after the wall was torn down, and years later when they were covered with buildings, “Look how it is fifteen years later, it’s amazing. ... Wounds can heal, but scars never go away.”

At the end was a streaming video, pictures related to the wall, with Pink Floyd music, and Regan’s famous phrase, “Mr. Gorbachev, tear down this wall!”

Christo says the Berlin Wall will not be permanent, but will be keeping it up for a week or two, depending on how many people visit, “Sometimes you get tired of all the shopping. I’m not saying one should go to a vitural museum every day, but once in a while.”

“Thank you so much.”

Addition: The Berlin Wall exhibit (I later found out the Communists called it the "Anti-Fascist Protection Rampart") would go up one more time the following year in 2009. When I went to the location in 2010, it wasn't there. Sad as it was a fitting reminder of the most visible location where Europe was split in two by the Iron Curtain, The Wall dividing not just a city, but people, friends and family whom felt they would never see one another again.

Posted by Bixyl Shuftan at 3:01 AM No comments: