At  Haute Style & Co. in the Haute Couture  sim, Nevar Lobo, Bcreative Wilde, and the Relay Raiders held a charity dance for Relay for Life. But events made it more than just a simple fundraiser. 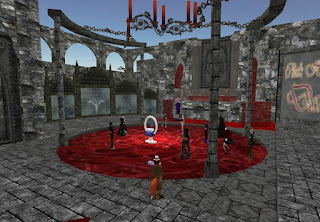 An announcement Nevar made gave the fundraiser extra meaning, the passing of Teri LaFollette, "... most of you know a very good friend of ours passed (away) on Thursday ... this event is to help celebrate her life..."

The dance began at 6PM April 4th Friday, and continued through the night with Bcreative as the one and only DJ. Then on Saturday came another problem. The dance had the ill fortune to be scheduled at the same time as  the login mess as the Second Life gird began going haywire at 7:30, and soon after no one else could get in. "I was one of the lucky few who was stuck online," Bcreative explained.

Nevar spoke highly of Bcreative, "she got almost 200 US dollars in online donations for the Raiders ... on top of what is (already) here. She had them listening on winamp and we managed to stay online until they finally closed the grid."

At 9 AM Saturday, those still on were booted out. It wasn't until about 1 PM in which people could log back on, and there were still problems for some hours. Despite this, the Raiders came back on and continued the fundraiser, calling on people to come over and donate for charity.
Pips Fetid remarked, "When the Raiders have an event, they have an event, whether or not SL cooperates."

After staying up for the 25 hours, BCreative finally hung up her virtual headphones just after 7PM SL time, "(I) was begining to think this was going to be a big flop, but you guys pulled through in the end. ... I love you guys. You guys are my heroes. ... We were up only a quarter of the time. I almost did quit. But you guys kept me going."