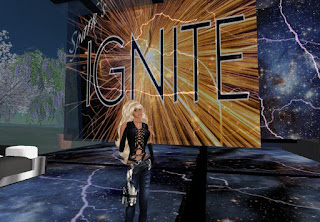 Sparks Ignite was originally opened in the Star Bright sim by Sparklin Indigo in January 2008. Part of the inspiration for it's name came from the dance floor, dazzling stars and lightning arc effects. It did well, and hosted parties almost every night.

But at March 1, Ignite had to close it's doors and move. "I'm going to miss Star Bright," Sparks told me, " 'Sparks Ignite and Star Bright' had a certain ring to it." So she found a new place, at the Deyo sim, which may make some think of that one Jamaican song, "Daaaayyyyyo." Sparks went to work on rebuilding the club. And on Sunday March 9th, it officially reopened, with StormShadow Maertens as DJ. 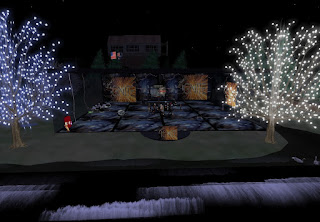 The club as the same dazzling dance floor as before, along with the dance ball and several pairs of dancing poseballs. It still has the couches where one can sit between dances, able to adjust their position on them. But it also has something new, a couple of floating platforms which one can hop on and dance on as they tilt.

The parties at Sparks Ignite can range from mild to wild, themes ranging from Country Music Night, to silk dances where little is left to the imagination. The Truth or Dare question machine can certainly make for some candid moments, and a few of the regulars are known for pushing the limits with skimpy costumes during certain themed parties and occasional antics. But outright gratuitous nudity and obscene behavior are grounds for being asked to leave. 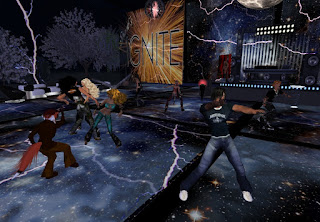 Says Sparklin, "I want Sparks Ignite to be a place that everyone that comes here, has fun, and knows that they are among friends!"

So for a dance party with lots of spark, head to "Ignite."