While the Space Shuttle Endeavor landed at Cape Canaveral at 5:39 PM SL time, March  26, at the International Space Museum (ISM) the landing was seen by those watching the live NASA broadcast shown there. 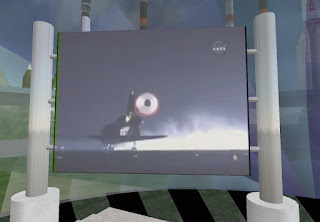 Set up in the middle of the "Spaceport Alpha" sim, the stage has two viewscreens visible to those whose computers can use Quicktime. Space shuttles and landings are shown when they happen.

The landing had originally been scheduled at 4:05 PM SL time, but weather conditions briefly postponed it. This was probably the reason for the small attendance, "Let them know there were some space gurus here, and could always use others. They'd have a great time, great learning experience."

The Shuttle Endeavor STS-123 mission launched on March 11, at 11:28 AM SL time. Here at the ISM, people had been gathering over an hour before the launch, though the launch time was too late for some (including this reporter) to watch the actual takeoff.

Posted by Bixyl Shuftan at 6:00 AM