Opening a Can of Wyrms

When I had heard about Baron DeSantis getting arrested, I was as outraged as anyone else. I thought of giving him a visit, but not exactly looking human, thought those Ghul jokers would lay charges on me for being an illegal alien. But as they were willing to let him go if enough was donated to the American Cancer Society, I went ahead with a contribution. I guess it was enough, they let him go.

After finishing up some business in my office, I thought about IMing Baron to say hello, see how he was doing. But someone called me first, my friend Sparklin Indigo. She invited me over, so I agreed and was teleported over ... 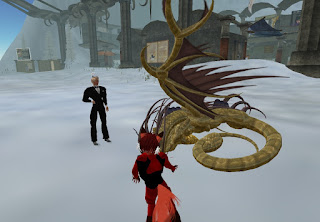 And I found myself not next to a tall beautiful blonde (a smart one), but a huge golden dragon. The next thing I noticed was that it seemed to be dancing to the music around us. There was snow on the ground, and nearby three Easter Island style statue heads dressed up whimsically with hats and scarves.

The dragon smiled, and spoke in Sparklin's voice, "Hi there, it seems wherever I go, people want to have a party." Around us, I could see other dragons, some large, some small, also dancing away. Other than one winged pixie, I was the only non-dragon here. Or rather, non-wyrm. A nearby sign read "Isle of Wyrms."

Sparklin had gotten herself a charm that allowed herself to take on the form of a dragon. And as everyone around us just wanted to have fun, I went ahead and joined in the dancing. It must've been quite an odd sight, a pixie, a foxfolk, and all those dragons dancing away.

Sparks and I talked about a few things, including Baron getting arrested and being let go after enough cash was donated to charity. I went ahead and IMed him again to see what was going on. I didn't get an answer right away, but he eventually did. I greeted him, and asked how he was now. Baron answered he was okay, all things considered, but was worried about the Ghul-ish police. It seems he had made a friend among the prisoners he couldn't turn his back on, and smuggled in something to help the inmate. He was now worried he might have been found out.

Concerned, I suggested to Baron he go somewhere the Ghuls couldn't reach him and contact legal help. He didn't think it was that simple, feeling that he'd have to keep looking over his shoulder. Then I heard him scream, "Noooooooooo!" Fearful he was going to go through that nightmare all over again, I tried to offer him a teleport, hoping the magic of this land would allow it to work against whatever those Ghuls had. Then I saw him appear in his tuxedo in front of us. He was safe.

So I thought. "Where am I?" he asked, looking around worriedly. "This is the Isle of Wyrms" I explained, telling him everyone around was friendly. It was then I realized he might still be in a little shock from his experience. And suddenly being dragged off to being in the middle of a bunch of big dragons, with sharp teeth and claws, might not be exactly comforting to his mind. I wondered if he might run away screaming. But instead, after making a few barely comprehensible statements about the cops closing in, he fainted.

Sparklin soon had to go, another friend of hers needed a hand, and then I noticed the pixie pushing Baron off to the direction of the river. I got between her and the ice-cold stream, "Where are you taking him?" She just winked at me, "I was only going to show him the fishies." Maybe the magic in this land would allow him to breathe, but even if so, I doubt waking up underwater would be the best thing for Baron's psychological well-being. So I wouldn't let her through, and she pouted and walked off. I pushed my fellow newsie a short distance to safety.

Seeing a nearby store, and thinking Baron was safe, I went over to check on something. Maybe it had a charm that would allow me to take on the form of a local for a decent price. I didn't find anything I needed for the moment, so I went back, and Baron was gone. He wasn't in the river, so apparently he had woken up and ran off.

Did I really help my friend? Maybe instead of the Ghuls, he was yelling from a figment in his imagination. Maybe what he really needs is a good therapist, minister, or bartender. And of course there's me. If he really is running from the Ghuls, they could try going after me for "aiding and abetting," as well as the kind of bovine by-product charge they slapped on Baron to throw him in to begin with.

I may have opened up a "can of wyrms" here.