Theres been some talk about it in recent weeks, wondering what it might bring. Well, its finally arrived. The Beta for Second Lifes Viewer 2.0. 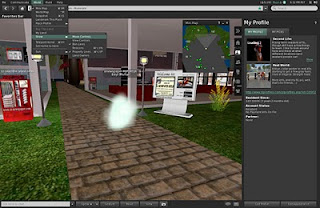 Today, we're excited to announce the launch of Viewer 2 Beta, the next generation of Second Life viewers -- combining an easy browser-like experience with shared media capabilities -- providing what we believe is the best experience yet for accessing Second Life, and a new option to choose from among Viewer 1.23 and other Third Party Viewers. We looked carefully at the experience design of other successful social media and technology platforms--such as the web browser, Facebook, the iPhone, Twitter, etc.--and the key elements that enabled them to reach mass adoption. You'll see much of that thinking baked into new Viewer 2 experience design. Our primary goal was to create a more consumer-friendly viewer--an imperative to bring in a new wave of Second Life Residents. After all, more people in Second Life means that there will be more amazing content, more customers to purchase virtual goods, a thriving economy, more friends and communities, and we can do even more to improve the experience. All very good things for all of us.

Taking a look, I saw they remembered Mac users, and downloaded the beta viewer. It was notable that the icon had a yellow bar with black stripes on the side, as if to signal under construction. It took a minute for the viewer to initially appear after double-clicking on the icon, though later on it came on normally. One friend when downloading it only got a string of binary code.

I managed to log on okay, but my friends list was a bit quirky, people listed as waiting, and I was cloudy. Eventually, the list appeared, though some were listed as offline whom later turned out were on. When I logged on later, there was no waiting period. My avatar remained a cloud, even on the second time I used the beta. So it looks like the beta needs improvement there.

Using the new viewer took some getting used to, and the side-to-side movement and crouch & jump buttons were missing from the movement toolbar. But there are interesting features. On the right of the screen are tabs, which can be clicked to open a window with information. Bringing up someones profile will reveal both their Second Life and real-life pictures (or whats used in place of them), which can be useful for those who wish to better mix their virtual lives with their real ones. Ones teleport history is stored, so if you forgot to make a landmark at a place you visited the previous day, you can check the history to return.

One feature should be of great interest to non-human avatars, such as furries and tinies: Alpha Masks. Meant to be used in place of invisiprims, they can render parts of your avatar invisible. For digitgrade avatars, this means no force field effect around their shins.

Being cloudy the whole time, my impression the beta still needs a good deal of work. But it does have some cool features that show good potential for it.