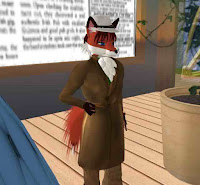 Some time ago, I discussed some of the more interesting moments when talking about Second Life in real life (link). A few more things have happened since then.

Friends of mine have mentioned a few stories. One college student moaned that during high school, his classmates then considered him a freak for hanging out here. Others described showing it to friends and family, who didn't always get it. One of the more inspiring stories was about one friend. In real life, she's bound to a wheelchair. She once talked to some online friends about her wheelchair getting a little worn. Some time later, she received a check in the mail, enough to get her the new wheelchair she wanted.

From me, a few more stories. One neighbor of mine asked about the people I meet on Second Life. I mentioned some, but what got her attention were the people with disabilities, such as being unable to walk in real life, but getting about with ease here. Another was one former friend whom in real life had lost her voice due to cancer, but was able to converse normally here. My neighbor told me it sounded interesting, and would go there if she had a computer.

And some of my discussions end up with comical twists. Word had spread at my workplace during the last election that I write for an online newspaper. They still ask me about it a little, though are usually more interested in Facebook and Farmville than Second Life. One lady and I talked a little about how you could modify your character to look more or less like you want it to, whether to something like the user, a science-fiction exotic, or a glamour girl. The lady happened to be noticeably thin, and later on while talking, commented aloud she wouldn't mind having a larger backside. I grinned, "You realize this is the first time outside of Second Life anyone's talked to me about getting a bigger behind?" We both had a good laugh out of it.

Another day, another coworker asked about the online paper, then hearing it was about goings on in Second Life asked about that. I described it some. Then he asked, Could you have sex with the girls there? I was a little surprised that hed bring that up, though this coworker did like to talk about the seedy side of life. I answered, "Well, you could engage in, virtual intimacy with a girl there if you wanted, and there are a few places that cater to that sort of thing. But just a few. Most people are there for other things." He then grinned, "Have you ever done that?" My answer, "Um, I did tell you I go about there as a humanoid fox in a reporter's outfit. Do you imagine me going about with the ladies there as that?" Apparently either he could or he wasn't listening, as his next few comments were that what I needed was a little noogie, even if just online.

I could have mentioned a few places I got brought to by friends or by accident, but it was probably best I didn't.