I was in Second Life Friday night when I got an IM from someone, an Emilin Nakamori, “Good evening :) I believe I may have a story that your newspaper may be interested in.” She told me she had made a machine in Second Life that moved without the need for scripts, “specifically, a weight-driven pendulum clock escapement (an escapement keeps the pendulum swinging).” Curious, I chatted with her for a few minutes via IM before heading to where she told me she was, in the sandbox in the Whitmyre sim.

What she told me sounded familiar, and it was. I had met her at her exhibit during SL5B at her exhibit just across the path from the newspaper’s (Events June 27). Meeting her again, I came across a dark-haired lady wearing a Victorian dress with a necktie and Steampunk-style glasses on her head. We greeted one another, her having added a laptop with a Victorian look to her typing animation. Bringing up our last encounter, she told me, ”Oh, the gear demonstrator I had at the SL5B was driven by a script; the excapement is entirely mechanical. I had to set up a pendulum and time its movement to find the proper length here. I apparently got it wrong nonetheless; Sidewinder Linden said I probably didn't make allowances for time dilation :P ... It’s performance is unfortunately erratic; Sidewinder Linden could not offer a possible reason, but, as the saying goes, ‘The wonder of a dancing bear is not how gracefully it dances, but that it dances at all.’ ;) “ 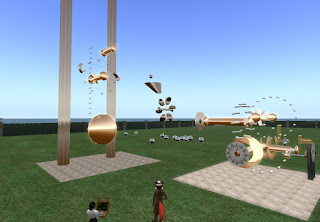 She then rezzed the pendulum machine, which slowly went in motion, “Theoretically, that pendulum should have a period of 6 seconds; the mechanism pushes it into a faster period, however.” She had been working on it since late June, and still had to have it assisted by a script. She rezzed another machine, “That is the mechanical clock movement I have worked up; I need to find a constant supply of power to mate the escapement to the movement to have a complete mechanical clock.” She had heard of sailboat races driven by simulated wind in the sims, and wondered it that could be a possible power source, “if the SL ‘wind’ can move a sailboat, why not a windmill?”

Emilin went on, “I have been considering a ‘waterwheel’, which uses temporary physical prims as weights on one side of a wheel. I have a proof-of-concept...” She then rezzed a wheel and ball-dropper that dropped metallic balls on the wheel’s cups, spinning it, “As you can see, there is inertia, but it dies out very quickly.”

I asked Emilin, “Has the changing of the Second Life viewer altered the performance of your machines, as it does some AOs?” She told me, “Not that I know of. I believe Havoc 4 was a much greater factor; several people told me at the SL5B that they had tried working with gears, but they were too unstable to hold together long enough to function.”

She then mentioned another physical machine that had been well received by others, and rezzed what she called a Physical Chain Demonstrator Base, “You click on the rotating arm to start or stop its rotation. If you change the orientation of the base, the script malfunctions.” Commenting at one point, “Unfortunately, I am no scriptor; that is why I got into physical machines ... Perhaps I should have gotten fascinated by something that isn't too ephemeral to sell ;) ... Sooner (usually, alas) or later all of these machines break, even if not left running. The important thing, to me, about these machines is that they interact with the SL environment AS AN ENVIRONMENT, not as a computer program, as a script does.”

Going on, “Designing these machines is a constant juggling of a need for precision and having to allow enough space for collision avoidance, with a bit more thrown in to allow for lag. These machines use server physics time; put a few of the chain demonstrators in a sim and start them up all at once and it would probably crash the sim ;) The first version of the clock movement used 10.1ms physics time; I reduced the gear count and it fell to 5.6ms.” The then noticed one of the machines had stopped, “Foo. The clock's already broken :/ “ 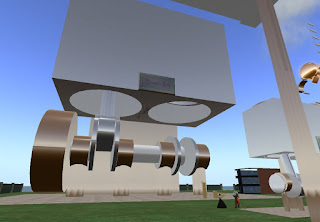 Emilin then mentioned, “Desmond Shang, founder of Caledon, decided he wanted me to build him a steam engine, so I made him one.” She then rezzed a piston steam engine about 25 - 30 ft high with the name “Desmond’s Folly,” “He liked the name, anyway; he decided it was too small... “ “So he wanted a more massive engine?” I asked. “Yes.” She then brought out a giant of a machine that must’ve been over a hundred feet tall, “He told me to throw it back and bring me its pappy.” “Whoah! Or the Mother of All SLengines.” I commented. Emilin grinned, “Oh, this is probably one of the largest objects ever made in SL that consists of linked parts.” I saw one of it’s two cylinders fly off, taken off my Emilin, “It DOES work better as a single-cylinder, although once it ran for about 45 minutes :)” “Well, the biggest engine like this that I've seen .... yes, I saw the second one coming apart.” “I ran into the limits of how distant parts can be and still be linked.” 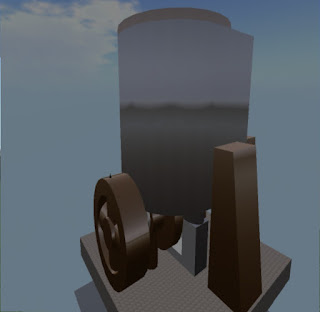 At this point a Bubblesort Triskaidekaphobia walked up, “Still working on it, Emilin, or just showing it off?” “Showing this one off. Its successor is too large to move; I am going to try Rez-Foo. It has a 55m diameter piston...” “Wow! That's crazy! Where did you put it?” “3km over Saint Kitt Islands ... It's not open to the public as yet.” She then rezzed a picture of another engine, a single piston one. But the one clue to it’s *massive* size was standing on it’s wheel, “See the little black speck on the flywheel? It is I ;) ” She told is it was, “Somewhere around 100m tall; its base is 100m square. It would JUST BARELY fit into this sandbox ... Actually, it would have to be taller than 100m; the trapezoidal supports are 60m tall, on a base that is 8m thick. So it must be over 150m tall. A small skyscraper.”

Bubblesort asked if a train could be made. Emilin answered, “That is what Desmond Shang wants to do, eventually; he has someone working on scripted physical ‘steam molecules’ that would expand and contract at a set rhythm in the cylinders to push against the piston; it would have to be a multicylinder engine, though, as a flywheel is essential to keep a one-cylinder engine going past dead center, and with inertia as damped as it is in SL, a flywheel is really just a decoration.” “Could it be done without making steam like that?” “Oh, certainly; these engines here are spun by a rotation script, with the pistons and tie rods moving strictly by physics.”

Bubblesort soon left, and Emilin turned back to me, “The big engine is still going, as a single cylinder. ;) Half an hour, now.” She then told, “The main reason I would like your paper to feature this is so others can find out about it and hopefully work on it themselves; I started a group, Virtual Mechanics, for interested people. I am hoping there are people out there who will take the idea and hit the ground running with it ;) Well, the really big one is under development (basically, it doesn't work, and may never do so), but the one here has been shown to the public. ;) “

“But really,” she looked back at the first machine, “I think the escapement is the important thing, as it does not use scripts at all, yet functions.”

I thanked her, then noticed she had changed the title over her name to “Madgirl.” Being a reader of online comics, I asked her if she was a reader of “Girl Genius” by Phil Foglio. She smiled, and after talking a little about the comic, she gave me a replica of the Heterodyne trilobite emblem.

It was then that the two of us parted ways, presumably the maker of these physical machines, part science and part work of art, going back to business.

This remains a favorite article of mine of my SL Newspaper days as I hadn't seen anything like Emilin's monster machines before, or since. She was clearly one who sought to see how far she could push the limits.  I never did come across her again, but did hear she was the Winner of the June 2011 UWA 3D Art Challenge. Whereever she is now, no doubt she's staying busy.
Posted by Bixyl Shuftan at 12:42 AM