It seems there's been no shortage of troubles in Second Life. Griefers, lagging, blackouts, and all kinds of bugs have plagued the system from the time I first came here. And sometimes I've wondered if the designers, the Lindens, had lost sight of fixing the basics while pursuing fancy new viewers. 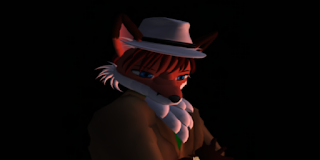 But what does one say when a problem that's been with you for months finally disappears?

For as long back I can remember, porting from one region to another had a chance of my avatar not messing up. Everything on me but my clothes would suddenly appear at my midsection, so my head appeared to be up my rear end, my feet were in the front of my pants, etc. It appeared on others, but for a furred avatar like mine, the results were more extreme. I called it "Porting Sickness" or "Motion Sickness." Others had a name for it more to the point, "Headcrotch Syndrome." So quite often, about half the time I ported it seemed, after greeting my friend, I'd say, "Oh, blast. Excuse me a moment, I need to clean up my avie."

It was annoying as heck, and pretty darn inconvenient. Not just for me, but those I went to talk to in-person (or is that in-avatar) other than chat through IM. But there wasn't much I could do about it other than re-rez my avatar and wait. And that's how it went for months.

Then a few days after the new version of the viewer was released, I noticed something. I hadn't had to re-rez my avatar in a while. No porting sickness. When you take a convenience for granted, one certainly realizes when it goes away. A nagging inconvenience that can pop up the next time you travel or not until several times later, well, you may not notice it for some time.

So thanks Lindens, thanks for getting rid of this darn nuisance.

Now, about my friend's inventory issues, could you get rid of the bug that makes her unable to wear her skirts?