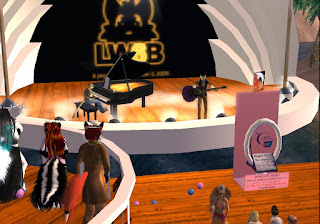 The Clothing Fair was not the only event for Relay for Life on Saturday, March 20th. There were others, among them a concert and a race. That afternoon, there was a benefit concert in Luskwood, and there was a cross-sim snail race.

At 12 Noon SL time, Luskwood held a concert for charity, to take in donations for the Relay. The event was held at the stage near the Great Tree.

From noon to 2:00 PM, come join us to listen to the awesome musical stylings of Frogg Marlowe and Jaycatt Nico for an hour, followed by the excellent voice of Alessandra Eberlain and her wide variety of songs for another hour. And, of course, don't forget to donate!

For the first hour, Jaycatt and Frogg performed for the audience. Jaycatt played the piano, while Frogg sang and strummed his guitar. At 1 PM, Alessandra took to the stage, her voice filling the airwaves. Lomgren Smalls and Daaneth Kivioq, whom helped organize the event were there, as was one of the Luskwood founders, Michi Lumnin. 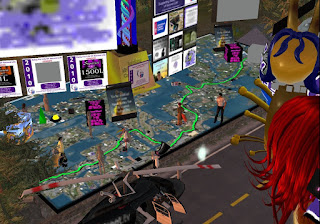 “Thank you Daaneth, Lomgren, for putting this all together. ... My Grandfather died of lung cancer.” “Lom did all the work.” “Please help us fight against Evil! Please donate to the Kiosk in front of the stage! CANCER CAN BE BEATEN!!!”

At 2 PM SL time was the start of the Relay for Life Giant Racing Snail Cross-Country Race. The giant snail races are held regularly in Second Life every week by RacerX Gullwing. Usually, the snails are decorated to whatever the rider wants, and are held on a course. This time, the shells had to have large RFL signs on the sides, and the race would be held though a long stretch of road on the mainland, through over forty sims. 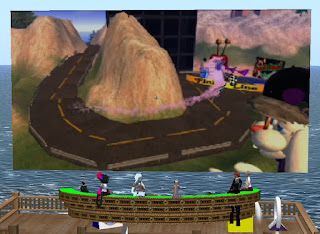 Thirty-six racers took part in the race. It took only a few minutes for lag to break up the line of snails, and the track went through towns, forrest, went over bridges, looked at by more then a few curious onlookers, went by places such as the Berlin’s Museum of Art, and more. After about forty minutes, Tindallia Soothsayer was the first to reach the end of the course, “thanks to lag and the last turn.” She had somehow avoided a bout of lag that slowed everyone else, and beat the next snail by over a minute. Following the race, a replay was shown in another sim for the racers and others.

The next RFL snail race will take part through sixty sims.