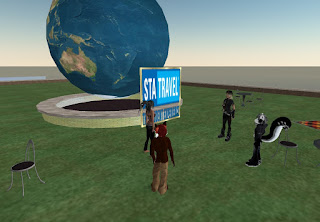 The STA sim may be gone (see Explore - January 27), but a piece of it lives on. Sparklin Indigo, one of the members of the STA staff, had the Orientation Island globe and a few sets of chairs and tables brought up to the roof of her club Sparks Ignite for "a little STA-esque hangout." On a nearby wall is a picture of the main STA building. Next to the globe is a screen flashing different scenes of the STA every few seconds, the images contributed by a number of people who took pictures.

And there's a DJ spot, made for the STA's #1 DJ in mind, Blarion Gazov. Next to the equipment is a sign, "No Thriller, No Green Day," two things people are asked not to request.

Former head of the STA GlobetrekkerBob Lane will not be around to see it for some time, though. He sent us a note saying he'll be gone from Second Life for a while.