Sometimes Valentines Day is just a sad reminder of me not having found anyone, or as another avie put it, "Happy Stick It to Singles Day." But for a friend of mine, the holiday turned out well. 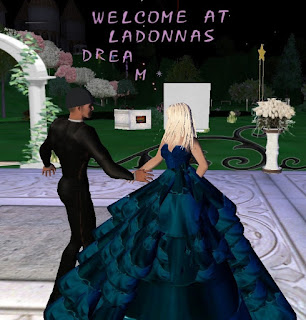 I had logged on to attend to attend a Valentines Day dance at Fortaelia. I doubted I would meet anyone for anything special, just a little time to relax. As the party called for red, white, or pink clothes (presumably only girls would be wearing the last one), I put on the fancy white outfit I had won at a contest recently, and ported over.

Shortly after arriving, one of my friends logged on and IMed me, Zeny. She had not logged onto SL for several days, and explained why. Her boyfriend and partner, Tim, was in the hospital. Although better, it was unsure when he'd be out. And it being Valentines Day, she felt alone and wanted to be with a friend.

And so we danced for a while at the party, chatting about things in both Second Life and Real life. As the Fortaelia party was starting to wind down a little, Zeny got an invitation from someone on her friend list to attend a wedding in Second Life. She was curious and wanted to go. I had been to some real-life weddings, including one with some ethnic traditions added, and had been to a couple roleplayed ones in the "Runescape" game. But I had yet to see one here in Second Life, so as I already had a fancy outfit over, I joined her in the teleport.

It took a little while for things to rez, the chair Zeny was sitting on among the last parts to appear. But the scene was quite detailed, with detailed white structures and flowers all around the walkway, which was next to a forested area. There were several bridesmaids there, as well as the best man and a few other guys. The seats, which were also white, were just about completely filled with guests, mostly dressed neatly though one lady in a formal gown still had a number of tattoos on. And of course there were the bride and groom up by the altar, holding hands.

They were waiting for the minister, and so we all waited, Zeny and I chatting a little about weddings. Then a few people crashed and disappeared, including the groom. So we waited for both them and the minister. They soon reappeared, and then came the minister. Finally the wedding could take place, "If there is anyone who objects to these two being joined, let him speak now or forever hold his peace." One lady typed *readies shotgun for anyone who objects.* And with that the wedding proceeded smoothly.

With people congratulating the couple, Zeny told me with excitement she had just gotten a call through Yahoo from Tim. He was finally out of the hospital. She was a bit quieter as she chatted with him, us following the others to the wedding reception dance. And we joined everyone else there, Zeny getting a blue gown out of her inventory.

Then someone else walked up, Tim. He had logged into Second Life, and Zeny had told him where they were. He went over to Zeny, who was next to a pair of dance poseballs, and they joined the others in the formal dance.

Together again, it was a Valentines Day for my friends to remember.

Posted by Bixyl Shuftan at 6:00 AM