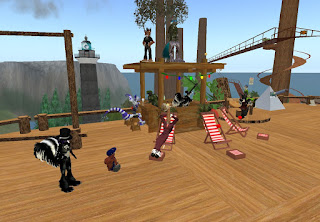 Dropping by Luskwood the other day, I found a couple of changes to the place. One was that the rest poseball rug at one side of the platform had been replaced by a few beanbags and a couple couches. Next to them was a vertical chess game. On another side, a small bar had been set up, with two inside acting as bartenders.

After a while, Michi Lumin, one of the four Luskwood founders, showed up. She was not in her Lusk purple dragon avatar, but a skunkgirl avie in a top hat and a dark tomboyish outfit, "... not sure if I want to show anyone ... but, I also want to let people know that 'we're not dead, only resting.' " Michi then rezzed a picture of two avatar heads: hyenas. 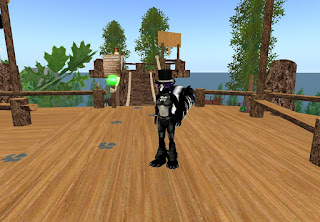 Although Luskwood has made some avatars this year, they have been all of the "Bunkies" line. The older "Luskwood Creatures" company's last products were the fruit and vampire bats. Michi commented the "peanut gallery" was saying Luskwood had stopped making avatars, "we're not intending to comply with it. ... This av, the hyena, is also not the only one we're working on."

Of claims by some that the crowd at Lusk could be a little dead, Michi answered there were some upcoming changes that should help the social scene at the Luskwood tree.