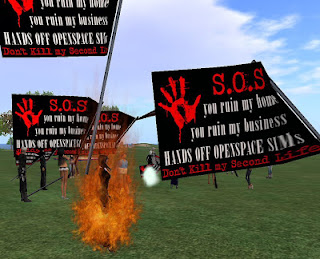 Many are angry upset and confused over the Linden turnabout on the open sims - it seems LL have grossly under-estimated the market for them and now are backtracking fast and those with openspaces are the ones who will have to pay for their mismanagement - click the image to join the protests.
There is also a JIRA - as yet unassigned where you can vote if you disagree with these proposed changes. You can also follow the argument in the FORUMSOne protested stated his reasons: 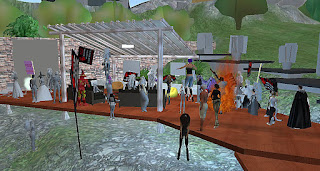 Feeling of trust are almost completely gone in Linden Lab and many are whispering conspiracy this coming just a couple of weeks after Linden Lab open the new region for residents.

At the same time came the news that Infinity Lindens office hour was over run with protesters also and those estate owners looking for answers:
Some were actually forthcoming in that Infinity did admit LL is looking into grandfathering.
Simone Stern has the full transcript from Jacks emergency office hours this morning and rather than make another copy THIS LINK will take you there.
In both Jacks and Infinitys office hours there has been a lot of two way conversation going on - that LL are to blame for this mess is undeniable BUT I would like to point out that the price increases are a way off and there is time for LL to find a better solution.
Dana Vanmoer
Posted by Bixyl Shuftan at 8:15 PM