Thursday June 25 saw the deaths of two famous performers in the US, Michael Jackson and Farrah Fawcett. In real life, people expressed their sorrow for their departures. And in Second Life, people did so by erecting memorials to them. 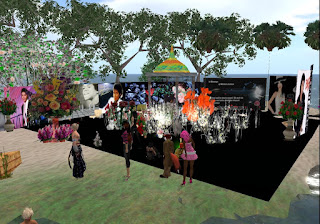 Of the memorials to Michael Jackson, probably the best one was in the Paradise Plantation sim. It had a pagoda, a number of pictures, notably of the singer throughout his career, and numerous flowers and candles. Above it was a circle of pictures that had flowers emitting from it a short distance.

Talking to one of the people at the sim, the large memorial had small beginnings, “... tried to find a memorial, and couldn’t the night he, passed. So we cleared the beach, and put a rose on the stand. Um, and that, *points* happened.” Others had added their own items to that lone stop-animation rose until it had grown to what we saw. People were still placing items there. He went on to say, “Here in Colorado, when a tragedy happens, everyone joins together and makes a big memorial.” When someone thanked him for building the memorial, he answered, “No, YOU did.”

The memorial is at (25, 243, 21) in the Paradise Plantation sim. I was told the sim was being used as a nude beach, though those not wearing much were some distance away and when walking near the memorial usually put their pants back on. 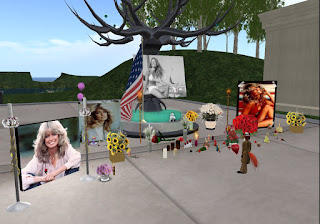 Farrah Fawcett’s passing after a long struggle with cancer did not make the news as big as Michael Jackson’s sudden heart attack. This may be why there were fewer memorials. I was told about one by a friend in the “caLLiefornia” sim, and it was at (165, 156, 25 ). There were a few pictures of the 70’s actress, and a number of candles. People can still put flowers, candles, and other items there. The sim has another memorial, one to Michael Jackson, not far away.

Source: Cait's Finds in Second Life
Posted by Bixyl Shuftan at 8:27 AM