Remembering Three Residents Who Passed Away

Death is the last thing on the minds of most people when they log onto Second Life. Unfortunately, people behind the avatars can expire, and the previous week brought three reminders that our virtual friends can one day be beyond our mortal reach.

Last week, Julie Apocalypse passed away after a long struggle with cancer. She was best known in Second Life for becoming the Queen of Bohemia in Tiny Empires. Besides a memorial being built for her, a service was held in her honor by dozens of her friends. Mojo Fiddlesticks and Raymond Goalpost headed the service. Mojo told those planning to attend Julies real-life funeral that it was requested purple be worn, I am attending for each and every one of you. 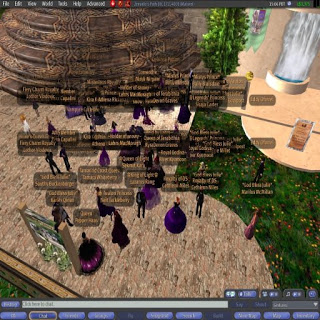 Raymond gave the following speech, Thanks for everyones patience with the move. We have all gathered here today to remember Julie Apocalypse. She passed away on May 17th, 2009, leaving behind family, friends, and her legacy which has touched many of us here in SL. I know that people are perceived in many different ways, depending on circumstances, and I wish to share with you my thoughts about Julie and then allow others to speak as well.

I have only known Julie though the game we played called Tiny Empires. From what I know of Julie, it was one of her passions. Julie was always eager to teach, to coach, and to help players, no matter what kingdom they were from. She was competitive, but fair. She relished running Bohemia and being online at all hours to not miss the next Trader or Festival. She was dedicated to leading and guiding all of us Bohemians, which in a way she saw as her children. She was witty and had a great sense of humor. And she was a stickler for proper spelling and use of language.

Many of us didn't really know how sick Julie was till we heard of her passing. Unfortunately, I knew along with several others which she had sworn to secrecy. And sometimes it was a burden to bear, but something you do for a friend. After Julie moved in with her daughter to become closer to her family, she was online much less often. She would still visit from time to time, but her visits would be short due to the amount of pain she was in. She was always trying to protect her Bohemian children from the truth and she put up one hell of a strong fight.

It was during one of these last visits to Second Life when I spoke to her. It really summed up for me what she felt about the spirit of Bohemia. Julie had come online to give us our tax amnesties, etc., and she TPed me to the castle so that I could liege her in preparation for my ascension to lead Bohemia. So I TPed, and in one of those great SL quirks my avatar appeared naked to me! Too embarrassed to ask Julie if I was naked, I acted normal chatting with her as I checked my clothes in my inventory and saw that yes, I was fully clothed, so not to worry. So we carried on, discussing her health and small talk, then lieged, and she told me she must go, due to her back being so sore.

I bid her goodbye and TPed to my home and was almost instantly asked, WHY ARE YOU NAKED? Naturally I turned a deep shade of red and meekly IMed Julie, Um ... Julie? ... was I naked when I was with you? And she just said to me, Why yes you were. I thought about saying something but ... what the heck ... this is BOHEMIA. We had a good laugh about that, and I know that as she logged out of SL she had a smile on her face. ... And that is whats important. Making special memories, laughing each day, and having experiences we can smile about.

I know that only scratches the surface of Julies personality, but she will be forever remembered by me for who she was and what she stood for.

I also have a message from Steelcobra Calamari who could not be here today, and asked me to speak for them:

Hello all, friends, friends and family of Julie, Bohemia. Sorry I could not be there as at this time I am just getting off work (wishes he could fire his RL boss). Well, just want to say ... Julie was one who inspired, motivated, and was always determined. She was a guiding soul to those that knew her. Willingly and selflessly helped those in need. She also had much humor as well. She always insisted that I should be a misfortune teller and open up my own psychic office. She will be missed on the physical. But know that she will continue to love us and smile on us in Spirit.

Raymond concluded, and Mojo spoke next, I used to take pleasure in talking in innuendoes ... that were sometimes so near to the bone. And Julie never told me off. (laughter) Her only exception was that she thought the word arse should be permitted. ... lag sorry. When she became ill, she refused to let me tell anyone anything. She refused to believe what the nurses told her in January this year. ... She spoke to me on the phone, and her main worry was that we were missing tax amnesties.

Mojo paused for a while, then resumed speaking, Sorry about that. SL always picks its moments. Even right at the beginning, on Boxing Day evening when she collapsed, her first words were, I need to get to the computer so I can give the permissions. She made her daughter ring me. The last time I spoke to Julie ... she admitted that it was terminal and she was not having treatment. She told me she had 6 to 12 months to live. What she forgot to say was that three months had already passed. She forgot on purpose, to protect me.

When I started Tiny Empires, there were no kingdoms. Someone bought me a TE HUD. I loved the game and moved the first time someone bribed me. I had no idea what I was doing. (laughter) Then Julie lieged me. I moved about 3 or 4 times ... daily ... and she said Hi ... within minutes she had given me more advice and help than the last 4 lieges had in total. And she explained to me that she lived about 1 real-life mile away from my house. That was our bond. She taught me everything as well.

People think that I knew Julie more than them. Okay, she sometimes confided in me about Bohemia, and I was her right hand man. But she didnt know me more than you ... nor did I know her more than you do. She loved each and every one of us, individually, for our minds, our souls, she loved all good people and stood for everything good. She never complained. She was an inspiration. She told me on the phone Bohemians were her children. Everyone she encountered on SL were close to her heart. But she was an intelligent woman, and she kept me at arms length because we met online. She was private, but loved wholeheartedly. Yes, her family knows how much we all meant to her. And that is why they have invited me to attend next week.

She cried, and said she didnt want to abdicate, but that she needed to for the good of the kingdom. Raymond was chosen by me because he believes in the Bohemia as created by Julie. And Julie never questioned my decision. She trusted my choice because she knew I didnt wasn't to ascend as I am not online as often as I would need to be.

She nearly died at Christmas when she first collapsed. And a few weeks later, she got an infection which sent her delirious and put her in the hospital. The nurses were going to let her go. Her daughter begged for antibiotics. She came home two days later, and came straight online as she had not been so for a whole week. She told the room, I have a trapped a nerve in my arm and cant type. Then she IMed me, and said, I nearly died. They brought me back from the brink of death. !! I said, and you told the room you have a sore arm!! Are you insane?! Please tell them. It sounds like you are being blasé. She said, no, I dont want to worry them. And I dont want sympathy.

Because she lobed us, and did not want us to feel pain. Also, she would not want any of us to sit online 24/7 and become ill. She wants people to see their real-life families, etc., and stop and smell the roses, and she wants us to remember her for what she stood for.

With the end of her speech, her fellow mourners spoke one after another, God bless Queen Julie.

Special thanks to Lomgren Smalls for providing the transcript and picture.


* * * * *
On May 26, 2009 a service was held for Artistic FimiColoud, whom had passed away from cancer one year before. She was Stephanie Koslow in real life and was 49. At her memorial at Park Galleries, people gathered passing one another memorial candles as soft music played in the background. A few people wore I Relay for Fimi tags. 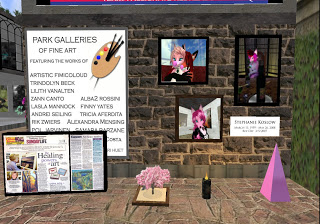 Artistics friends talked about their late friend, her life online, her art, about how the little pink fox refused to admit defeat.

Artistics memorial at Park Galleries remains, at Park (234, 41, 78). Her work can continue to be viewed there. There is also a landmark to her treehouse home in Second Life, Sunweaver Air (42,116, 21), which continues to be maintained and has a number of pictures of her around the place. Most are various screenshots of her life online, but one there was one picture of Artistics avatar lying curled on the ground while an angellike being with a face much like her real-life one rose into the air. She also has a place in Second Life named after her, Fimi Falls, in Hope Gardens in the Colorado sim at (189, 44, 25).

Lohti Aeon's profile description didn't have much. A few groups, a picture of his virtual self, a single location. A man of few words, his 1st life tab simply stated, I'm a 19-year-old soldier who spends his spare time on his computer, after balancing out school, family crises, work, and other mumbo-jumbo.

In real life, he was Specialist Jacob D. Borton of the US Army. Described as a shy video gamer in his high school years, he joined the Army and was sent to Iraq. He was described as reserved, but not afraid to come to the aid of someone he felt was being pushed around, He wouldnt say much unless there was some injustice being done, and then he would speak up.

Borton met his end not at the hands of Islamofacist terrorists or their booby traps, but by one of his own comrades. He was one of the five soldiers killed at the combat stress clinic at Camp Liberty on May 11, 2009 by a sergeant sent there whom left the building and returned with a gun. Borton is described as putting himself between the shooter and another man, trying to talk the assailant into putting his gun down. He was 20 years old.

It was this week in which news of Borton's death finally reached his friends in Second Life. In response, space has been purchased at the War Memorial Annex in Ileina Cova for a memorial plaque in honor of the fallen soldier whom like the rest of us had a virtual presence here.