SL5B opens with speeches from Phillip Linden and M


Philip Linden opened the birthday celebrations with a speech that reflected on his amazement at how much secondlife has grown:

"I feel I have lived a lifetime in that 5 years, it feels almost like 50 years"

I wonder if those excluded think its 'great'?

He goes on to talk about the progress that has been made on the grid itself and notes that Linden Lab are 'working hard on stability' thats it is a 'big focus' for LL to work towards. 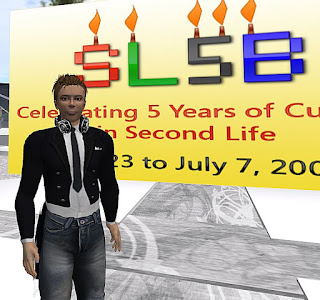 M(ark) Linden also touched on a tender subject that of IP rights:

"One of the fundamental elements is on IP rights. Its really really important that people who create great content are able to enjoy it and protect it, its one of the things philip put in place and which has underpinned the economy today."

But although he did mention the topic and admit that creative content is the backbone of the economy there were no answers as to how this was to be achieved or even if Linden Lab were doing anything about content theft.
There was a lot of corporate bolstering and obviously the speeches were tailored to boost that image but on the whole I felt the speeches were aimed at the residents without actually solving any of the present resident concerns, both speeches taken together did acknowledge those issues exist and let everyone know that Lindenn Lab have been listening and they are aware of the problems facing ordinary residents.
I can't say there was any reassurance that these issues would be fixed, just that the Lab is aware. To me that was a reassurance in itself an acknowledgement of the work they still need to do.
The speeches felt to me like a placification for those that have issues and concentrated on the creative content to be seen over the 20 sim exhibition.
There is some incredible content to be seen over there and I urge everyone to take the time to 'wade through the honey', as the lag has been labled, and have a look at what is now possible in Secondlife.
I hope there are some hair displays around too as M pointed out to Philip 'its been 4 years since his avatar was updated and although his hair is the best in SL it is also the oldest' showing perhaps the human side of the Lab. I wonder if some of the hair creators out there could send him some prim hair based on the newbie style he is wont to use.
M Linden himself has obviously been shopping and looks a good deal better than his newbie CEO pictures :)
Happy Birthday Secondlife

If you want to watch the entire speech see the blog HERE
Posted by Bixyl Shuftan at 7:59 AM